Simple Steps to Block Text Messages on iPhone and Android 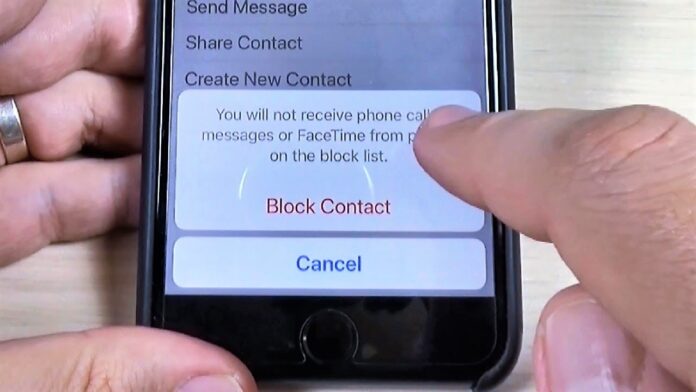 We are often bombarded with spam messages, all thanks to the advent of bulk SMS tools. Thankfully, both iPhone and Android come with built-in features to block unwanted text messages. Sometimes, blocking a contact is the easiest way to put an end to an undesirable conversation.

There are a number of ways to block text messages on iPhone and Android. Check them out in this article.

Tip – Do not engage with spam messages on any account as it gives a hint to the sender that the user is active. Some messages ask you to opt out of the mailing list by sending ‘STOP’. Never fall for such tactics unless the message is from a legitimate source. The best way to keep such senders at bay is to block them instantly.

How to block text messages on iPhone: A step by step guide

To block messages from contacts saved in your phone, go to the conversation with the specific contact. Click on their name and then select ‘Info’from the list of options.Now, you will see an arrow right next to the phone icon. Tap on it and choose ‘Block This Caller’ from the dropdown.

Alternatively, open ‘Settings’, go to ‘Messages’ and then ‘Blocked Contacts’.Click on ‘Add New’ to manually add the contact whose messages you wish to block. This method comes handy when you haven’t had a conversation with that contact.

Although you cannot block text messages on iPhone from unknown numbers, you can always filter them. For this, enable the ‘Filter Unknown Senders’ feature from ‘Messages’ in the Settings app. iPhone will save these messages in a separate tab and not send any alerts on receipt of the same.

You can also report iMessages from unknown numbers as junk by clicking on the ‘Report Junk’ link inside the message.The message will be deleted from your phone but the number will not be blocked. To block the unknown number, follow the first method mentioned for known contacts.

To block a number in your call log, go to the Facetime or Phone app. Tap on the ‘i’ appearing on the right side of the concerned number. Tap on ‘Block This Caller’ to block text messages on iPhone along with calls.This can be done for regular as well as Facetime calls received from both known and unknown contacts.

There are three ways to block messages on Google’s default messaging app.Firstly, open ‘Messages’ and scroll down to the message received from the contact. Upon pressing and holding the conversation, the ‘block’ icon will appear on the top right side of the screen. Then, tap on it to block messages and calls from that number.

Another way of doing this is to open the conversation and press the three dots appearing next to the name or number of the contact. Tap on ‘Details’ and then choose ‘Block & report spam’. This method may vary a bit depending upon the smartphone and operating system you are using.

Just like iOS, Android also provides the option to filter out potential spam messages.To enable this feature, press the three dots in the Messages app and select ‘Settings’. Go to ‘Spam protection’ and toggle the ‘Enable spam protection’ option.

The Facebook Messenger app is also commonly used as the default messaging app. To block messages on Facebook Messenger, long press the number or name of the contact.Next, tap on the ‘hamburger’ icon to open the Menu and then select ‘Block’.

How to block text messages on iOS and Android with apps

If you are really tired of spam, you can try using external apps for getting rid of junk messages. Note that a lot of such apps are paid, although you can use the free trial version. It is also recommended to check the privacy terms and conditions before installing these apps as they shall be accessing your contacts.

The previous methods are good enough to block text messages on iPhone and Android anyway.If you still want to install an app for this purpose, you can try Truecaller. The app is capable of identifying spam callers and sending alerts for calls and messages received from them.

Rupandeep Kaur
The talented Ms. Rupandeep is a young writer with the enthusiasm to do something new each time.
RELATED ARTICLES
News