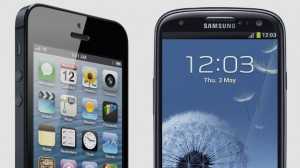 Samsung seems to have stolen the crown of the most coveted mobile phone company from the once considered innovators, Apple.  Apple has decided to cut orders for the parts which are used to build iPhone5 as there is major downfall in the sales of iconic phone whereas today Samsung celebrated the 100 million sales of Samsung Galaxy S3.  Samsung Galaxy S3 and Samsung Galaxy Note 2 have proved game changers for the Korean company and have put the company on a higher pedestal in smartphone market.

Samsung’s marketing strategy positions Galaxy phones as fresh and new whereas iPhone 5 is being targeted at adults. Teens and young adults are more inclined towards Samsung phones due to its vivid and spanking new side.

Apple iPhone 5 Vs Samsung Galaxy Note 2 Vs HTC Droid DNA: Which Phone Is Worth The Price?