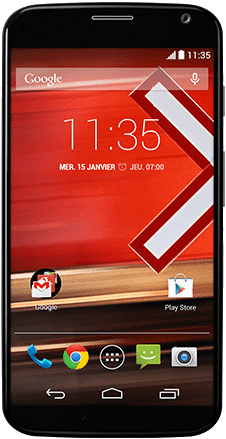 There have been several reports and rumors regarding the specifications and features of Motorola’s next flagship smartphone, Moto X+1. And now the latest leaks have given us our first good look at the upcoming smartphone.

Android Police have showed a newly leaked images displaying a purported “near-final prototype” device from Motorola. As per our experience with the previous leaks, the phone’s dual speakers and custom wooden back are strongly pointed that this could be the Moto X successor.

The source who leaked the images also claimed that the upcoming smartphone would be available in other shades of plastic including black and white as well as custom leather finishes in blue and purple.

However, this latest leak did not provide any information that whether the smartphone will also be equipped with a Kevlar-patterned back inherited from the Droid Ultra Maxx.

The Moto X+1 is likely to boast high-end specifications and features in every respect. It would be having a new 5.2-inch screen with a pixel resolution of 1920 x 1080. It would be powered by a faster Snapdragon 800 processor, 2GB of RAM and 24GB of internal storage capacity. Meanwhile, a higher 64GB version would be equipped with a microSD card slot not found on the regular model. It would also sport a 12MP rear sensor coupled with a 5MP front snapper.

Details About Amazon Fire Smartphone: Here find Out What is on Offer from Amazon?