It seems Microsoft is aiming to get a strong hold in the Indian market by launching budget friendly smartphones in a quick succession. According to Tech Radar reports, Lumia 540, which is priced at Rs.10,199 is scheduled to be on shelves from May 18 onward and will boast some of the high-end features. The upcoming handset which has been enameled using poly-carbonate plastic finishing clearly resembles the look of the previous Lumia smartphones. 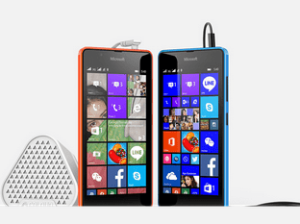 Operating on Windows Phone 8.1, Lumia 540 features  wide screen of 5-inches with a resolution of 1280x720p. To make it a worthy buy for the modern users, it has been powered with quadcore Snapdragon 200 chipset, which is perfectly supported by the 1GB RAM.

Not just that, to offer improved user experience, the phone comes with 8GB storage, which can be expanded to 128GB using a microSD card. To treasure special moments of the user, it features an 8MP camera paired with LED flash and auto-focus.

For selfies, the phones has an 5MP camera at the front. Keeping in mind the changing preference of the users, the phone is enabled with dual-SIM support, yet, it is restricted to 2G and 3G connectivity modes only. Last but not the least, the phone comes with a 2200mAh battery embedded inside to allow buyers to use the features properly.