More
Home Latest News Gadgets Both The Chips Are Here: iPhone 5’s A6 and iPod’s A5X: Which... 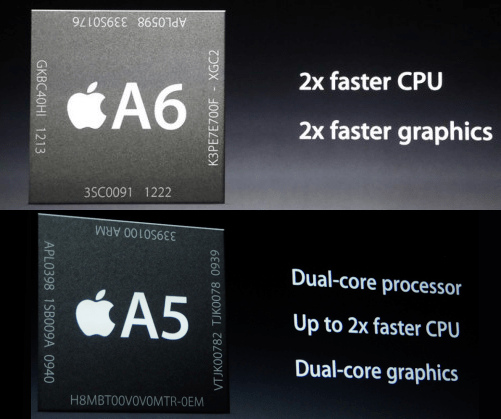 The cat is finally out of the bag after Apple’s announcement about the latest iPhone 5 and the new iPod Touch. But the next big question on everyone’s minds is what difference would it make from a gaming perspective, now that Apple has announced that both these devices will feature different chipsets?

Now the A5X chip of the iPod Touch isn’t anything new, and has been around since the past six months. It is basically an updated version of the previous A5 dual-core chip with an enhanced graphics processing unit or GPU. The A5X was designed to have twice the power of the A5, with a dual-core ARM Cortex-A9 system-on-a-chip with a clock speed of 1GHz, giving out a quad-core GPU.

In the iPod Touch, the A5X would probably be downsized a bit, not just in terms of dimensions, but also correspondingly in terms of power. We can probably expect a clock speed of around 800 MHz and a dual-core GPU for better battery efficiency. Since the screen size is much smaller than that of the iPad, the downgrade from quad-core to dual-core GPU shouldn’t have too much of an adverse effect on gaming performance on the iPod Touch.

The A6 processor within the iPhone 5, on the other hand, would be the first device in the market to feature the Cortex A-15. The A-15, we’ve heard, is expected to be at least 40% faster than the A9 in terms of performance, keeping the number of cores and the speed same. We can expect the A6 to feature a dual-core processor, in keeping with the A5 designs. This would make the A6 much more powerful in terms of supporting browsing, usage of applications, and other functions of the phone in general.

But we doubt if the speediness of the A6 would translate into a better gaming experience. For a phone, Apple would definitely want the battery to last longer, and would not be able to put in a high performance GPU into the iPhone 5 as a result. However, with Apple, nothing can be said until we actually get our hands on the devices, given their extreme secrecy in revealing specifications and technical details about them.