There have been several changes in the latest version of the Chromecast. It only weighs 55 grams and has a new user interface built on top of Android TV.  The interface is designed to move the focus from apps towards content. The newest Chromecast with Google TV runs on the new Google TV platform, new branding for the Android TV platform.

Also, all apps that were earlier accessible on Android TV 9 Pie through the Google Play Store will be available for download on the new version of Chromecast with Google TV launched on 1st October.

With Chomecast with Google TV, users can also take full advantage of Google Assistant for voice commands. The streaming device connects to the HDMI port on a TV or monitor, and needs a separate switch for power support.

Users can now stream their preferred services and games, and at the same time, can also link their subscribed services to the interface, which will automatically display the content on the home screen. The streaming set will enable access to all popular OTT platforms, including Disney+ Hotstar, Netflix, Prime Video, ZEE5, Vootand many more Chromecast is also embedded with Google’s Chromecast protocol to allow users to cast video from their smartphones, tablets, and other compatible devices.

Read: The Future of Television: Google Chromecast vs Roku vs Apple TV 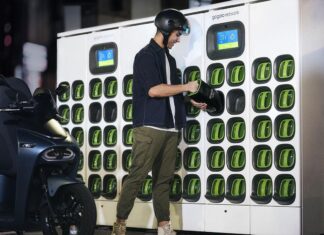 Sakshi Sood - April 23, 2021 0
Hero MotoCop has collaborated with Taiwan based company Gogoro to launch electric scooters along with battery-swapping stations in India. The new partnership will focus...

What Do US Senators Have Against Apple & Google?

What To Do In Case Your Puppy Accidently Eats Your AirPods

This Sleek Bang and Olufsen Speaker Will Disappear In Your Bookshelf