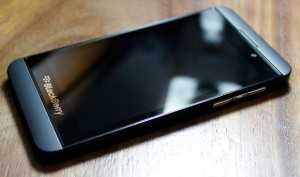 Blackberry 10 L-series is all set the capture the smartphone market with an indomitable roar, well at least the leaked images of the phone say that. It was yesterday that RIM revealed very few details about the next Blackberry flagship phone.  Now Vietnamese forum Tinhte.vn has published first images of the BlackBerry 10 OS based L-series smartphone.

Without a doubt the phone is a looker. Its fresh and chic design is quite similar to prototypes released earlier. Unlike other Blackberry phones, the BB 10 is going to be an all touch, no keypad phone which is a RIM effort to catch up with the smartphone  touch screen market.

To give a better grip to the phone the L-series phone is textured and it also has a Near Field Communication ship on the back panel cover.

The 4-inch touchscreen of the phone has a front facing camera and carefully designed metallic volume control buttons and the power on/sleep button on the top. RIM would be revealing Blackberry OS 10 on January 30.

HTC M7 Vs BlackBerry Z10: If Z10 Won’t Bring Back RIM From Dead, Nothing Will

Sony Xperia Z Vs Blackberry Z10 : Xperia Z Is The New Sexy, Would BB10 Be Able To Come Any Closer?

Would Blackberry 10 Get Back The Precious Ground Which RIM Lost To Samsung Galaxy S3 And Apple iPhone5?